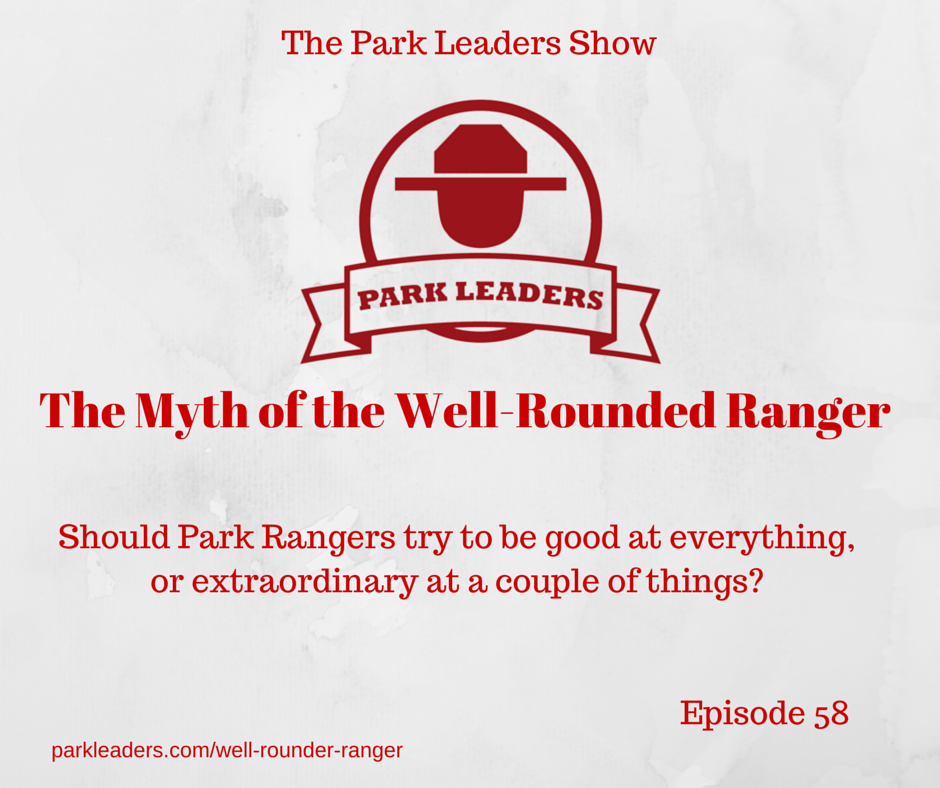 When I was a park ranger, the former director of our agency used to preach the concept of the well-rounded ranger.  I believe his message was that our agency needed to train rangers for more than law enforcement. He wanted us to think in terms of service, and not enforcement.

If focusing on service is what he meant, he was correct. But the concept of a well-rounded park ranger is hurting parks.

Sure, there are people like Tom Betts at Bandelier National Monument who can do everything. Tom is a true a well-rounded ranger. But I was not. And chances are that you are not either.

And that is OK.

It is a benefit to your park that you are not well rounded.  Not being well-rounded means you are strong in some areas that can be a tremendous help to your park.

It also means you have weaknesses. There are some things you are not good at. That is OK.

In fact, a good park manager knows how to consider the strengths and weaknesses to assemble a great team.

Now, I expect park rangers to know enough to solve problems and get things done. But often, that does not mean the individual ranger needs to know how to do the actual work. The ranger needs to be able to recognize there is a problem and begin the process to solve the problem.

The idea of a well-rounded ranger, taken too literal or too serious, creates an environment that focuses on weaknesses and hampers strengths. Let me give you an example. Auto maintenance is a weakness of mine. In fact, I have no interest in it at all.

At one point in my career, I worked for a supervisor who felt park rangers who felt all rangers should complete the same tasks. Each ranger was responsible for doing the same tasks the same amount of times. This took people away from doing what they were strongest at to improve in areas where they were the weakest.

I get the desire to have everyone on the team contribute to all areas of the operation, which would be why you may want well-rounded rangers. But it just doesn’t work.

The well-rounded ranger concept forces everyone to spend an inappropriate amount of time improving their weaknesses. Great teams set people up to build on their strengths. Great leaders know this and assemble teams with strengths in mind.

If taken too far, the well-rounded ranger concept is like having every member of a baseball team spend two innings at each position during a game. In that case, you get an outfielder spending time practicing to throw a fastball rather than perfecting his craft if catching fly balls.

A Gallup poll found the 87% of working Americans felt that finding your weaknesses and fixing them is the best way to achieve outstanding performance. Sixty-one percent of workers say they need to focus on their weaknesses because that’s where they feel they have the most room for growth. In follow-up interviews, they said that improving weak areas makes them feel more responsible more well-rounded and less vulnerable to embarrassment and risk of failure.

They feel conscientious about working with their weaknesses, and hope that the practice will shield them from future reproach and failure. Meanwhile, self-made millionaires are spending each day avoiding their weaknesses in order to stay focused on their strengths where distinction, fulfillment, and profits are found. Hour by hour, day by day the workers from this survey protect themselves by becoming more well-rounded and ordinary while the millionaires enrich themselves by becoming more specialized and extraordinary.

That information from Business Brilliant may work for a self-made millionaire, but you may be wondering how it applies to you and parks. Consider this. When you promote the strengths of your team, it allows you to fill holes on your team with someone who is strong in the areas you need the most.

To me, it is a choice to be well-rounded and ordinary or specialized and extraordinary.

What do you think of the concept of a well-rounded ranger?